Last month I went to Tbilisi, the capital of the Republic of Georgia. Before I went, the only map I had of the city was this inset on the 2007 (third) edition of ITMB’s Georgia. It covers the downtown area that most visitors are interested in: on the right bank of the Mtkvari river from the Metekhis Khidi (Metekhi Bridge) at the downstream end to Respublikis Moedani (Republic Square) at the upstream end.

There are many things I like about this map. It has a basic visual hierarchy: Rustaveli avenue is given extra width to show its importance, and the high-traffic roads are in yellow. Also, they’ve made an effort to use Georgian words (moedani, khidi, gamziri, kuča) for common features (square, bridge, avenue, street) — even though the transcription scheme is not what is recommended today (kuča would be written kucha). This is surprisingly rare: most maps, in fact every other map I encountered on this trip, translated those terms. But if you think about it, leaving them in Georgian, with a handy little table of geographical equivalents in the legend, has a distinct advantage. It immediately gets you started with a few words of vocabulary.

Now, this map is not detailed enough for finding your way around the old town, which is the tangle of curved streets near the Metekhis Khidi. For example, if you look near “Blue Bath,” you see a lot of generalized, unnamed streets.

Before I went then, I made myself a paper map from Open Street Map. I cruised around in OSM at zoom level 17, stamping out PDFs. I printed these out and then cut-and-taped them together. Besides being fun, it was an excellent way to familiarize myself with the city’s geography, and I highly recommend this exercise.

(Ignore the yellow highlighter on the map. That was just my way of keeping track of where I’d been.)

One thing that’s good about OSM is that it is generally in the local language. In the case of Tbilisi, the streets are mostly labelled in Georgian, and this gives you a reason to learn the Georgian alphabet – which in turn makes reading street signs easier. (If you would like the Georgian alphabet at hand while reading this post, the Wikipedia page on Georgian scripts is quite helpful. This is the mkhedruli script.)

But if you look closely there are also a surprising number of features labelled in other languages: there is some English, like “SIXT rent-a-car” or “The Statue of King Vakhtang Gorgasali.” There’s also some Russian (Храм Метехи). I guess this is the nature of volunteered geographic information. On the positive side, from this kind of thing you can deduce some things about who visits Tbilisi, and who’s interested in mapping it. Actually, in my two-week experience, Russian-speaking tourists in Georgia outnumbered those speaking English.

According to the OSM wiki, zoom level 17 is roughly equivalent to 1:4,000 scale, making this the most detailed paper map you are likely to find. I found it very accurate, even the pedestrian streets (blue tinged) and the incredibly valuable pedestrian underpasses. It’s also quite up-to-date. For example, where ITMB had Leselidzis Kuča in 2007, the street has now been renamed to K’ot’e Apkhazis Kucha.

However, OSM can be quirky. The major Tavisuplebis Moedani (თავისუფლების მოედანი), or “Freedom Square,” is not labelled at all, although the monument in the middle of it (Tavisuphlebis Monumenti/თავისუფლების მონუმენტი) was labelled on my screen as I was looking at OSM. And that label disappeared in the export to PDF. A bit weird.

Once I had arrived in Tbilisi. I began hoovering up maps. The first one I got, since I was staying at the Envoy Hostel, was the Envoy hostel’s branded map. (“Envoy Hostel Tbilisi City Map”) I imagine this map turns up in many Tbilisi locations under different branding. It’s dated 2017 and a tiny note in the corner says it is made by “Saniday.” 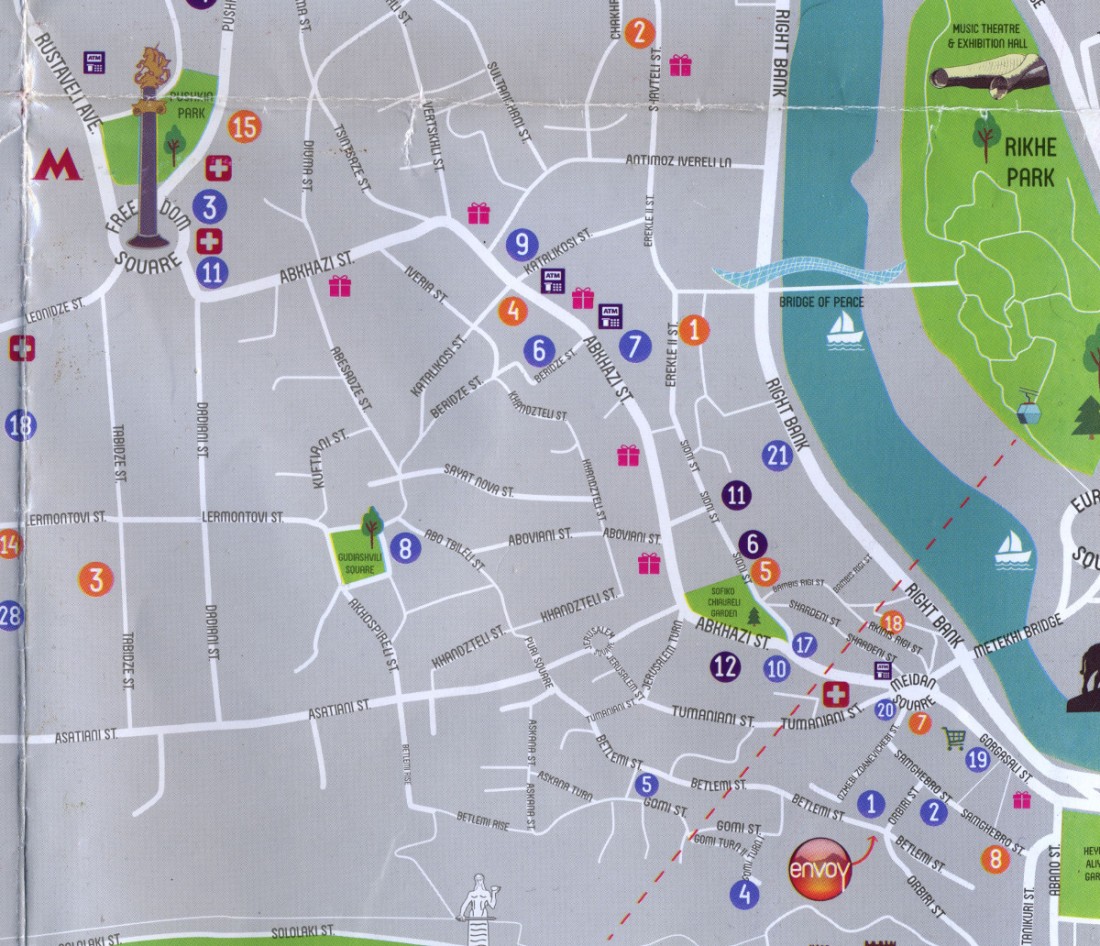 There are lots of good things to say about this free map. The streets are clean and mostly labelled. Points of interest are flagged, although many of these are just the establishments for eating, drinking and shopping that have sponsored the map. Most notably, they’ve picked up a couple of widenings in the streets which catch the eye as landmarks, and have named them, , like “Jerusalem Square” and “Meidan Square.”

I proceeded to Prospero’s Books on Rustaveli Avenue (a delightful bookstore) and bought three maps. I bought the Tbilisi City Miniguide and Map (undated with no publisher mentioned)…

and Tbilisi: A Walk Around Old City, by Idea Design Group (undated)…. 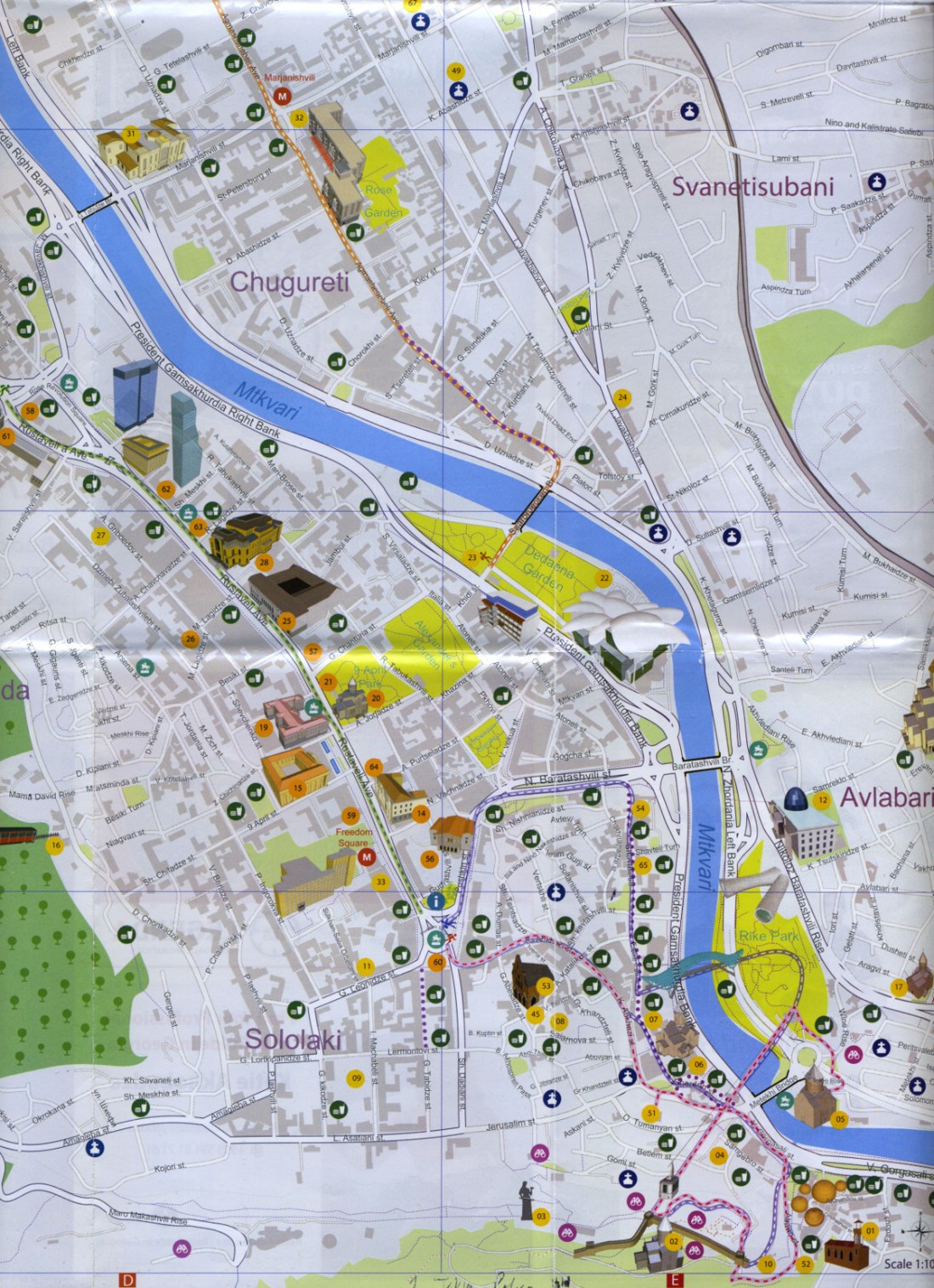 Let’s start with the Tbilisi City Miniguide and Map. If you look at the area between the Metekhi Bridge and the Peace (Mshvidobis) Bridge it’s apparent that this piece of cartography is a disaster. 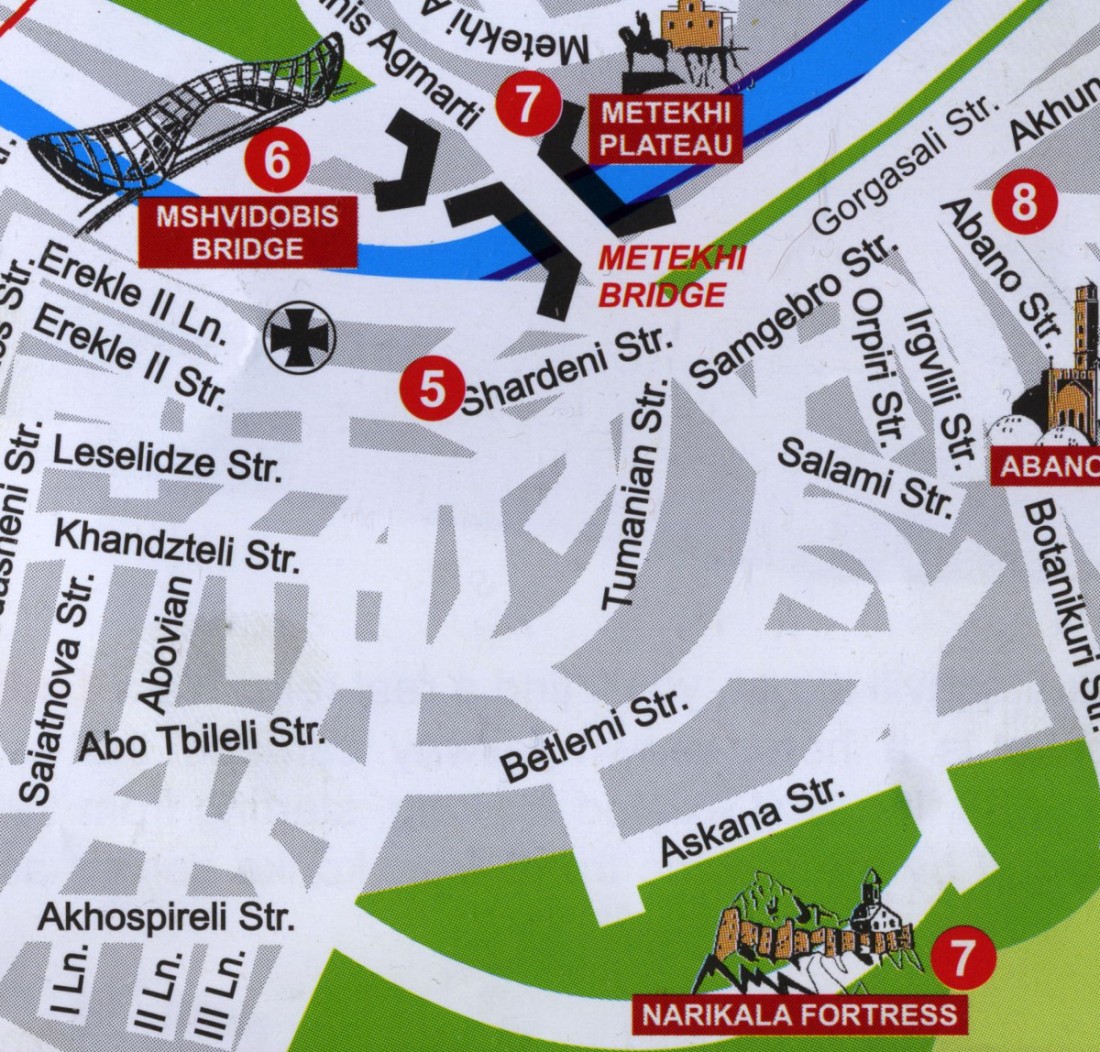 It’s just a spaghetti tangle of unlabelled streets. So we’re going to set this one aside as a scary map that you probably shouldn’t buy.

The next thing you might notice is that there’s a surprising similarity between OSM and Tbilisi: A Walk Around Old City. One might almost suspect they were made with the same geodata. The shapes of blocks are the same; building outlines are the same. (As a digression, can I just say that building outlines on city maps don’t really help us? They prove useful only when pedestrian walkways go between them. Otherwise they create clutter.)

I have to credit GeoLand for resisting the urge to put little 3D rendering of buildings on their map. These are great for helping you recognize which building is the opera house, but they obscure too many streets beneath them. (GeoLand, I should note, are the masters of mapping in Georgia. They have produced the regional maps you are likely to pick up at visitors centres, and it is some very nice cartography.) I also like GeoLand’s visual hierarchy, with major streets being yellow. But I find GeoLand’s fattened streets pushing between building outlines less intuitive than Idea Design’s narrower streets.

Around Betlemi St (which they, confusing, have translated — “Bethlehem” — rather than tranliterated — Betlemis) it’s a bit of a tangled tube-fest.

Unfortunately on both the Geoland and the Walk Around Old City, little icons overlie important information. Does “G. Khandzteli St.” (shown as “Gr. Khandzteli St.” on Walk Around Old City and გრიგოლ ხანძთელის ქუჩა on OSM) intersect K. Aphkhazi St. (K. Abkhazi St./კოტე აფხაზის ქუჩა)? No! But we can see this only on OSM because of church symbols on the other two maps. And on GeoLand, Tavisuphleba Sq. seems to read Visuphleba Sq. because of the unfortunate placement of a hotel icon.

Both GeoLand and Idea Design’s maps have the same scale, near 1:50,000, and both come with a metro map. But Tbilisi: A Walk Around Old City also comes with a street index and a nice “Description of Architecture of the Main Avenue,” explaining eighteen buildings along Rustaveli. On the downside, the marking of the “Grand Tour” (clear dashes on grey) and the “Short Tour” (red dashes on pink) both follow the overhead cable car line from Rike Park up to the Narikala Fortress, and their lines not only obliterate lower Gomi Street (does it connect with Betlem?) but also make it look like there are two bridges (or is it one bridge and a shadow?) across the river between the fanciful Peace bridge and the Metekhi bridge.

Two other maps of Tbilisi are worth mentioning. One is the map in the Lonely Planet 2016 Georgia, Armenia and Azerbaijan. 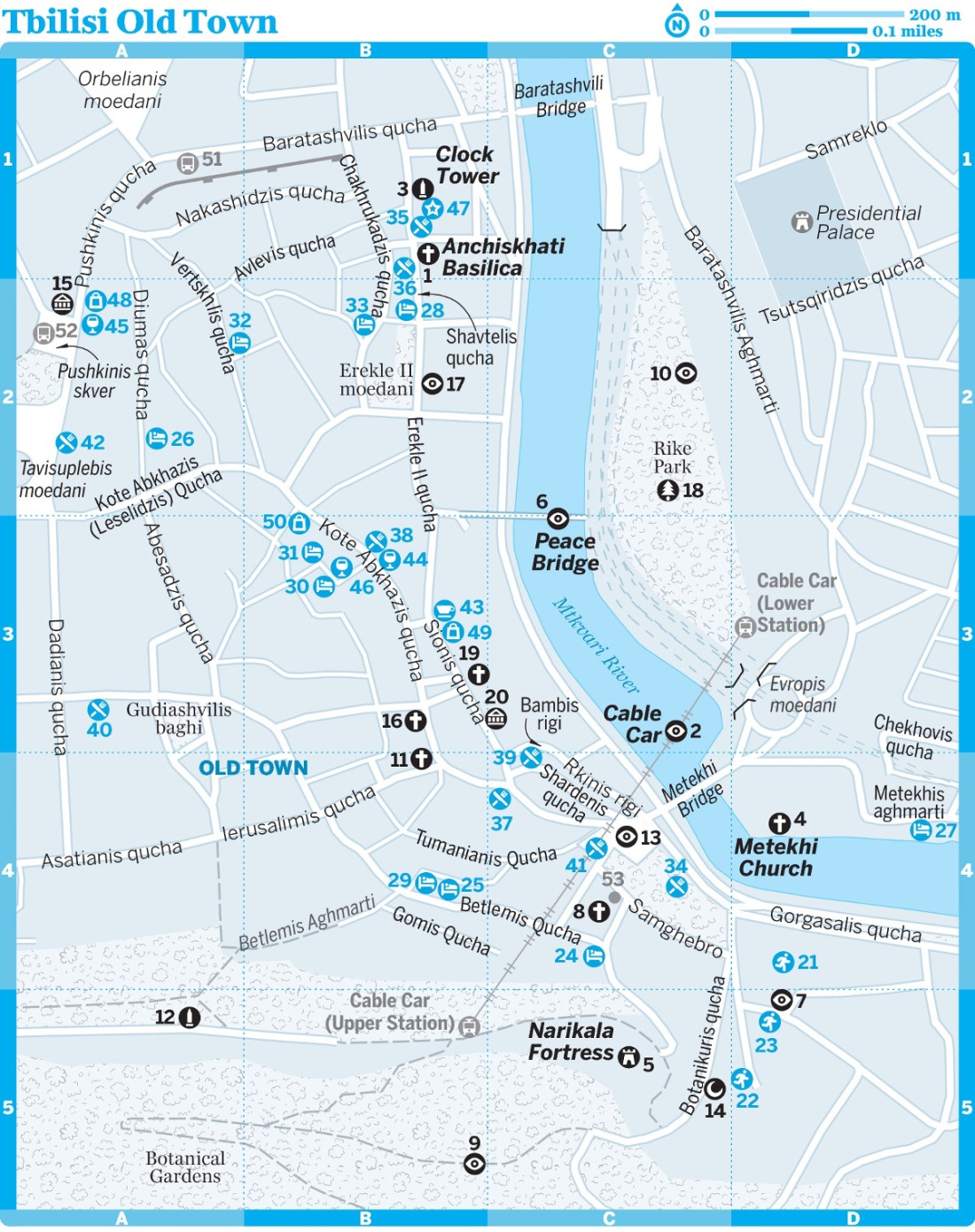 It’s the familiar styling of Lonely Planet maps, but now that we’ve looked so closely at these other maps, we can appreciate the good, bad and downright weird things LP has done here. On the good side, this is a really clean map. It’s also the only map we’ve seen that labels Kote Abkhazis with “Leselidzis” in brackets so we know the old name of the street. On the bad side, many streets are not labelled, leaving you mystified as you wander around old town looking for a street sign. (Although I’m open to considering that this actually may make for a better exploratory experience.) As for downright weird, they’ve transliterated the Georgian letter ქ as ‘q,’ so the familiar word for street, ‘kucha,’ appears as qucha. Yes, it’s true that when typing with a Georgian keyboard you do strike the q to get ქ, but this letter is always transliterated as k, or k’, or the IPA /k⁽ʰ⁾/ — not Q.

Last but not least is this hand-drawn map from Mark Elliott’s 4th Edition (2010) Azerbaijan with excursions to Georgia. I know it seems weird to look in a guide to Azerbaijan for a map to Tbilisi, but there it is. 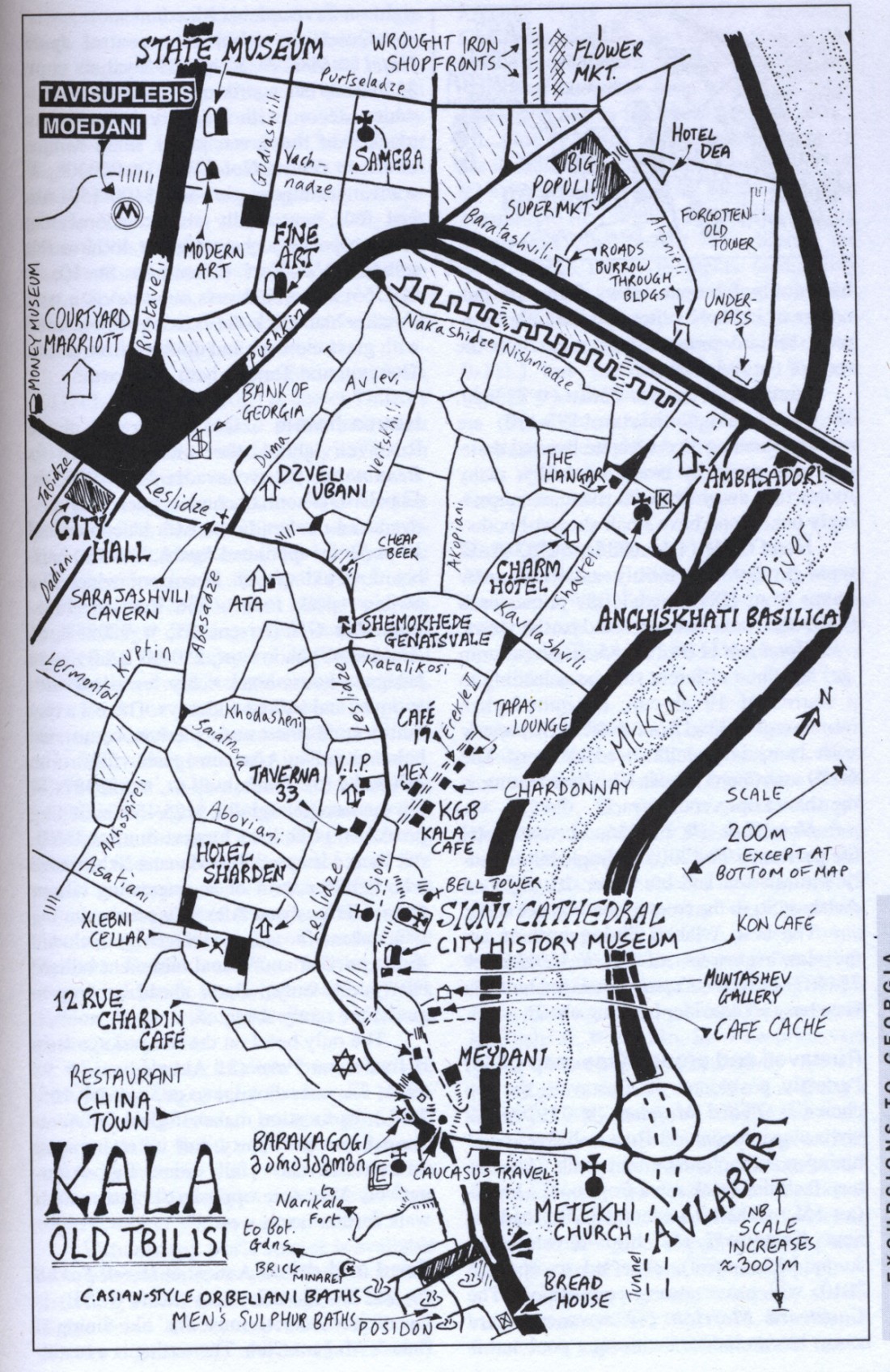 This is an absolutely amazing map. Mark Elliott’s guidebook is filled with these hand-drawn maps — it is officially it my favourite guide book in the world! Naturally most of the maps are of towns in Azerbaijan. But here too (taking into account that the book is eight years old – a new edition is out this year) he has done a model job. Notice how the street widths flow and change naturally, widening into little openings. The impression is of a map someone has carefully drawn for you and you alone. Notice how none of the labels run into each other or obscure important information. Even though before I praised a map that used Georgian terms like “kucha” instead of street, I like here how he has omitted “street,” “avenue,” etc. Without colour he has still shown us where all the parks are, the river, the important landmarks. This, in my mind, is where the future of mapping is going: carefully curated, hand-drawn maps.

With all of this to choose from, what did I use? In the end, the map I carried around and pulled out the most often was the OSM map that I had printed at home. It had all the alleys. It had the pedestrian underpasses. It had Georgian on it, so I didn’t have to wonder if it was Betlemi, Bethlehem or Betlemis St: it was just ბეთლემის ქუჩა. I was happy to have all these other maps (except the weird Tbilisi City Miniguide and Map) and I absorbed important landmarks from them. I just didn’t tend to pull them out as often. When I did pull out a second map, it was GeoLand.

If you want to print your own OSM map as I did, it’s a relatively simple process. I understand that there are sites that claim to make this easy, however I never encountered one that would work at zoom level 17, so here’s what you do.

OSM has a handy export as PDF function under the “Share” button.

(Not sure how that’s sharing, but whatever). The important thing to do first is to re-size your browser to approximately the aspect ratio of the paper you are going to print on (letter-size, in my case). Then, simply pan around, saving PDFs that overlap slightly. They should all come out at the same scale. Print them. Cut and tape.

One thought on “Eight Maps of Tbilisi”